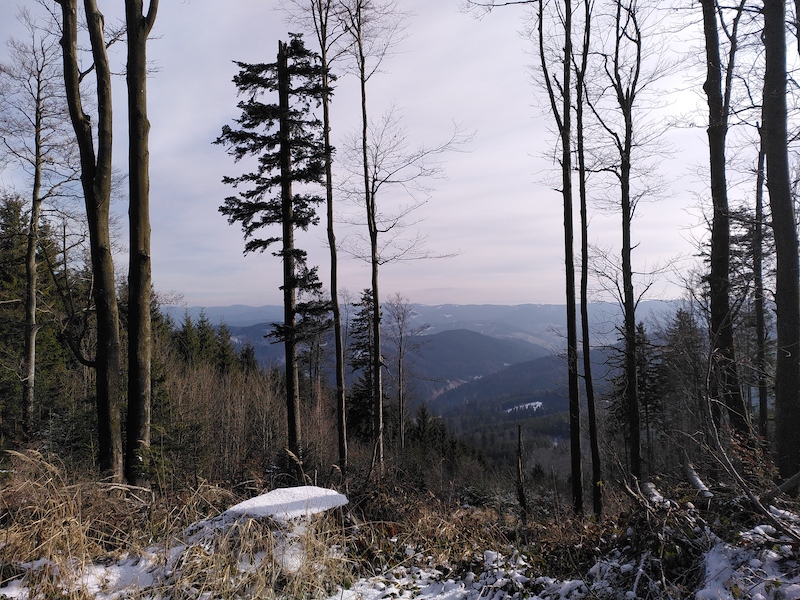 I’m in the depths of researching my MSc. thesis, and partly because that has brought me to the Carpathian mountains in eastern Czechia. The research is on the stakeholders and organisations involved in wildlife conservation in the area, how they cooperate with one another, and how local history has influenced these interactions. I’m about halfway through the fieldwork and I’ve had some great conversations and learned some interesting things. I thought this a good opportunity to share some insights about the local history and ecology, and give an update on how the research itself is going. I’ll do it in two blog posts, the first with an introduction to the area and its history, and the second going more in-depth on the research, particularly the interviews with local stakeholders.

I have spent the last 4 weeks in the westernmost fringe of the Carpathians, where after snaking through southern Ukraine and Poland, the range extends out a last finger to form the border between Czechia and Slovakia. It’s a beautiful landscape at this time of year, colder and with more snow than I am used to. On the Czech side, the mountains and their foothills stretching along the border are part of the vast Beskydy Protected Landscape Area: a landscape with valuable cultural and ecological heritage. The area is relatively densely populated, but contains smaller specially protected areas for wildlife. The Beskydy PLA is bordered on the Slovak side by the Kysuce PLA.

I am staying in a large town called Rožnov pod Radhoštěm, an old Soviet industrial centre and later mountain resort. One thing I have learned is that when living somewhere new, the best people to accompany you are anthropologists – there is no better way to learn about a people and their history. This is especially true given the second thing I learned, which is just how alien the Czech language is to an English-speaker that has experience of Irish, Spanish, German and Dutch. I was naive before coming here, nothing spoken or written looks even vaguely familiar. I am staying with two anthropology students who graciously translate for me. Their lecturer, who grew up here, joined us for a week and invited us to a local punk gig that his wife’s band was playing at. Over some foamy beers and ear-splitting vocals, he told me about the history of the place.

Rožnov pod Radhoštěm before the 20th century was a small town typical of the region, characterised by pastoralism, and by later glass-making and weaving. After WWII, Czechoslovakia was part of the Soviet Eastern Bloc, complete with the requisite puppet socialist government. The Soviets chose little Rožnov (population 3,000-5,000) as the site for a new industrial and research centre, and the population of the town ballooned in the post-war period with researchers, workers, and engineers, one of whom was the lecturer’s father. Across the road from me is the old (Nikola) Tesla factory, where all sorts of radios, televisions, and other devices were made. They now decorate the walls of the bar that hosted the gig. The Soviets made a strategic choice: Rožnov is protected by the Carpathians and some smaller ranges, well tucked away up here from the grasp of the Western Bloc. It emerged in recent years that they additionally used the area to conduct secret testing of anti-tank infrared devices. Another fascinating nugget is that Soviet brutalist apartment blocks that dot the town are built on large pillars, designed to be detonated such that the towers would collapse forwards onto the main roads to impede an enemy invasion from the West.

As for the punks, they have a strong history in Rožnov, centred around the once regionally renowned and now-closed Murder Club. The music they played provided a means of rebelling against the oppressive communist regime. The Murder Club was great because it was the only alternative venue in town, so all the different breeds of alternatives were forced to mingle there, despite wildly different views and values. Now the old punks have grown up, some becoming part of the town administration, governing a population of about 16,000. Standing at the back of the tiny room and watching a comically small mosh-pit of a dozen local teenagers, the greying rebel-punks standing back at a safe distance, clutching their pilsners, it was hard not to feel a satisfying sense of continuity, a sense of something shared. I enjoyed the music for the sheer novelty of it after two years sans gig, though I felt I was missing some deeper meaning by not understanding the Czech lyrics. To my relief I was later informed that the shouting wasn’t intelligible to anyone.

I’m here in Rožnov because it is nestled in the middle of the Beskydy PLA, close to the Slovak border. In the surrounding hills and mountains, there are roe deer, red deer, and boar, and pursuing them, grey wolves, lynx, and a few elusive bears. In fact, this area comprises the western edge of continuous wolf and bear occurrence in the Carpathians. All are living in a densely populated and developed landscape. There is a hill behind my accommodation that I sometimes climb on my breaks, where I find deer and boar tracks alongside those of dog-walkers and trail runners.

It is interesting to find myself in a shared landscape like this, not least because none exist in Ireland, but because there has been heated debate in conservation policy for two decades about whether to prioritise land-sparing or land-sharing. The former is the traditional thinking of setting aside land for wildlife without a human presence – think reserves, national parks, SACs. Land-sharing has recently been gaining the upper hand in the literature, emphasising a lived-in landscape that can also house stable wildlife populations. Both methods are of course needed in response to the biodiversity and climate crises – land-sparing is essential in some cases – but in practice it is clear that land-sharing is both more feasible and has more potential as a primary solution.

In a shared landscape, there is a balance between human-wildlife conflict and coexistence. Farmers and other locals have told us about some of these conflicts. Otters and cormorants compete with fishermen for fish, ravens take newborn lambs, the invasive bark beetle ravages pine plantations. Deer can also ravage forests when their populations are left unchecked. Families of boar tear up crop fields remarkably efficiently. Beavers fell trees and their dams flood fields. Wolves, bears, and lynx predate on different deer species, competing with the gamekeepers, and wolves in particular can take sheep. All but the bark beetle are an integral part of the ecosystem. Human activities meanwhile impede natural processes and put pressure on wildlife populations. Sheep farming and traditional agricultural practices are important for maintaining the traditional cultural landscape that supports agricultural species like hare, pheasant, and quail. But these practices are being replaced by industrial farming and monocultures, and those species are disappearing. Other human activities are directly in response to conflicts, particularly hunting boar and poaching of wolves and lynx to mitigate losses in crops and game animals. We heard about one poacher caught with several lynx in his freezer.

Behind ostensible human-wildlife conflicts there is usually a complex web of ecological, cultural, and economic forces, and very commonly, conflicts of values and beliefs between the human stakeholders. Local farmers are squeezed by EU CAP subsidies unfairly stacked in favour of large industrial agriculture companies. Foresters want more deer removed to protect their seedlings from being eaten and farmers want more boar removed, but gamekeepers want to keep their numbers high to maintain their income stream. Wolves could help to control deer numbers, but are vilified, their numbers and the number of sheep they take are exaggerated, and they are shot or poisoned. Farmers can avail of compensation for livestock taken by carnivores, but the process is too arduous and the amounts too low. Conservationists assist in providing protective measures such as electric fences and guard dogs, but struggle to engage meaningfully with stakeholders with opposing values and attitudes towards wildlife.

A key assumption in my research is that where there is a human-wildlife conflict, there is usually an underlying human-human conflict, which in the literature is referred to as a conservation conflict. An illustrative example is the conflict between the desire to conserve the wolf and restore it to the European landscape, versus the damage they can do to rural economies. On the surface, we see sheep being killed and wolves being shot. A human-wildlife conflict. But that phrasing gives the wolf too much agency. When we speak to farmers, the real complaints they have are with the convoluted structure of the state compensation and subsidies for mitigative measures, for example. Some have welcomed the return of the wolf, seeing it as a natural part of the landscape.

My research seeks to explore the conservation conflicts in the Beskydy-Kysuce region, particularly related to wolves and wild boar, two species that often find themselves at the centre of conflicts. How do key stakeholders in the management of these species interact? Do they cooperate, and if so, why? I want to find out what drives the conservation conflicts (or indeed, coexistence), and I have a hunch that local historical context, and the diversity of values and beliefs in the stakeholder network play an important part. In the next post, I will go into more detail on these questions and how I hope to find answers to them during my stay in Rožnov.

Another post by Brian Reilly: Desperate Times Calls For… Half Measures