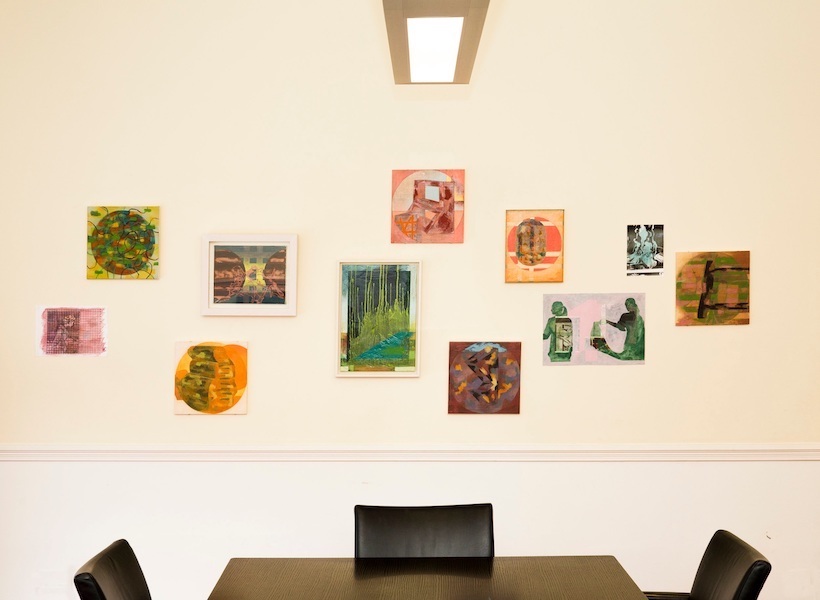 Art, Ecology and the problem of boundaries

In about 2008 while sitting in the office of a Functional Ecology lab in Viterbo Italy I responded to an art-residency call-out that was recently formed. The group who made the call-out which focused on “Art and Ecology” were based in the North of Ireland and as I had wanted to work in that way and that space for a while this seemed like a positive step to take.

Their response went something like this; “Thank you for your submission, we really like your abstract paintings, but when you have photos of your ecological art, please do send those over to us”……

I took no offence to this response, but I did consider asking the question “have you ever thought that Van Gogh may have been the first ecologically minded artist?”. Surely his passionate engagement with nature could have been considered an early “environmentalism”?

But what seems clear to me is that I don’t fit into what might be defined as an “ecologically minded” way of making art even if my interests do align very well with artists who work in that way. That space, (Art and Ecology) combined with another space that could be called “Arts and Health”, provide both a lot of hope for where art is going now, and also for the power of art to cross boundaries into other areas of practice.

But in another way these formations could be considered to be doing as much harm as any good that they do. Aren’t they creating further boundaries where we need to be tearing (artificial) borders down?

What one person finds to be of quality or engaging, or the right definition, may not pass “go” nor collect €200 for another.

My own art has (finally) softened from the hard-edged abstraction that I sent that group in the North, and has definitely entered a wistful if not particularly “hopeful” space.

This work entitled “Weltschmerz” (literally; “World-Pain) has a very “knowing” title, but I’d better give credit to The Big Bang Theory as a source:

I suppose the difficult point is where art-making meets change-making. For many ecologically minded artists, their art is their activism. Yet because of the way that people’s lives are bracketed or structured and the way that they consume culture, I remain unconvinced that this is in fact the right forum in which to engage them on these subjects.

If mindsets need changing for global shifts to happen, then arguably a decent Joan Mitchell or Cy Twombly painting could bring a person closer to knowing their power within the world than an art-work made with the specific intention to educate or direct a person’s actions?  But that idea very much reflects my view of things and definitely my taste in art!

But interests and influences are not the same thing. I have an interest in change-making on both local and global levels, but the influences on my art are more likely to come from Meditation practice or a piece of music that I love.

I remember catching a free gig by the Cork band “TALOS” once and thinking that their sound or direction could be defined as a sort of “Eco-Optimism”:

And where music is an art-form that has the capacity to reach a far wider audience than Fine Art, I’d argue that greater impact is possible there too. Where activism is needed or at least desired in my own life, I have taken myself back into the education system and have recently completed two new courses.

I was asked by one faculty member about what I might have learned by taking the first iterations of both the INNER MBA course (run through Sounds True), and the Design Thinking for Sustainability course (run through UCD in Dublin), at the same time.

Well, of course I’d have to say that my first lesson was the obvious one of “don’t take on too much at the same time”….

But I knew that when I started, yet there was an overriding need to not allow myself the luxury of “one view” of the world and it’s problems. I wanted and still believe in the power of bringing oneself out of one’s comfort zone by stepping towards the most profound blending of sets of knowledge that one can imagine.

I explained to this questioner my position by using an analogy from the Fine Art space. In the history of art, I see (and have used in discussions), a view that art has swung like a pendulum between the poles of “Classicism” and “Romanticism” across long periods of history.

The Romantic view would be one of a sort of “people centered”, humanistic view of the world, and the Classical one would be one that is more “objective” and which would be quite sure that there is a “world out there” that we can measure, depict and quantify. Humans would be just another facet of that world.

Without stating a preference for either view, this model helps me to understand where lots of areas of thought, practice, and sciences sit in relation to both the world and the humans that use them.

So, happily for me, I was able to confirm this “thought exercise” by doing these two courses, and at least for me, they sat quite clearly into one or the other of these two boxes. The IMBA course was a very Romantic attempt to set people up with the skills to go (primarily) back into business and change things from the inside out.

And then the DT4S course was definitely about arming people with the skills to change the systems that are entrenched in our world and which need “disruption”. A Classical approach which on some level suggests that there is a world that needs “fixing” beyond the borders of our gaze.

Now, this model gets interesting when I begin to see the Classical skills or tools within the Romantic zone and visa-versa in the Classical.

I feel like there might be a different approach though, one which might allow for what I see as two quite distinct types of personality; the first which is committed to making changes in the world, and the second who feel that if they didn’t try to change themselves, that there was little hope of changing the world.

The suggestion here is that we could frame education around “Designing Actions” for one set of people, and then “Designing Actors” for the second. And no doubt there would be people who fit in the middle or who could straddle both definitions.

It is for me a hopelessly Romantic notion to think that we will be saved by going back into Google or LinkedIn armed with some Mindfulness, and likewise tools for redesigning business without knowing the place of human processes within that world, is an objective view of the problem that is I think fulling great unhappiness in the younger people around us (they seem to think that they hold the responsibility of “fixing” the world!)

For me, by the end of DT4S the word “Sustainability” had been replaced by the phrase “The Future of Work”. If we do not look at the FoW and see that now especially after Covid (are we “after” yet?), without looking at the changed space that we are in, and really drilling down into (no fossil fuel puns intended) our basic assumptions about how we choose to spend our time, then there’s no hope.

The recruitment company CPL has a “FoW Institute” which has published a very interesting White Paper on the FoW in which they lay out the changes that they see coming for what they define as their “Three W’s”: https://landing.cpl.com/future-of-work/future-of-work-world.html

This “Workplace”, “Worktask” and “Workforce” breakdown of where things are going holds something true in my opinion; each of these “W’s” are profoundly changed now, and it’s up to us to inhabit or “occupy” those spaces in the way that suits us best.

Dermot Browne is an Artist and Creative Coach based in County Cork.

He is currently curating the group exhibition “Cultivating the Empty Field”
at MacroomTown Hall for the month of August. He also makes a mean Risotto.