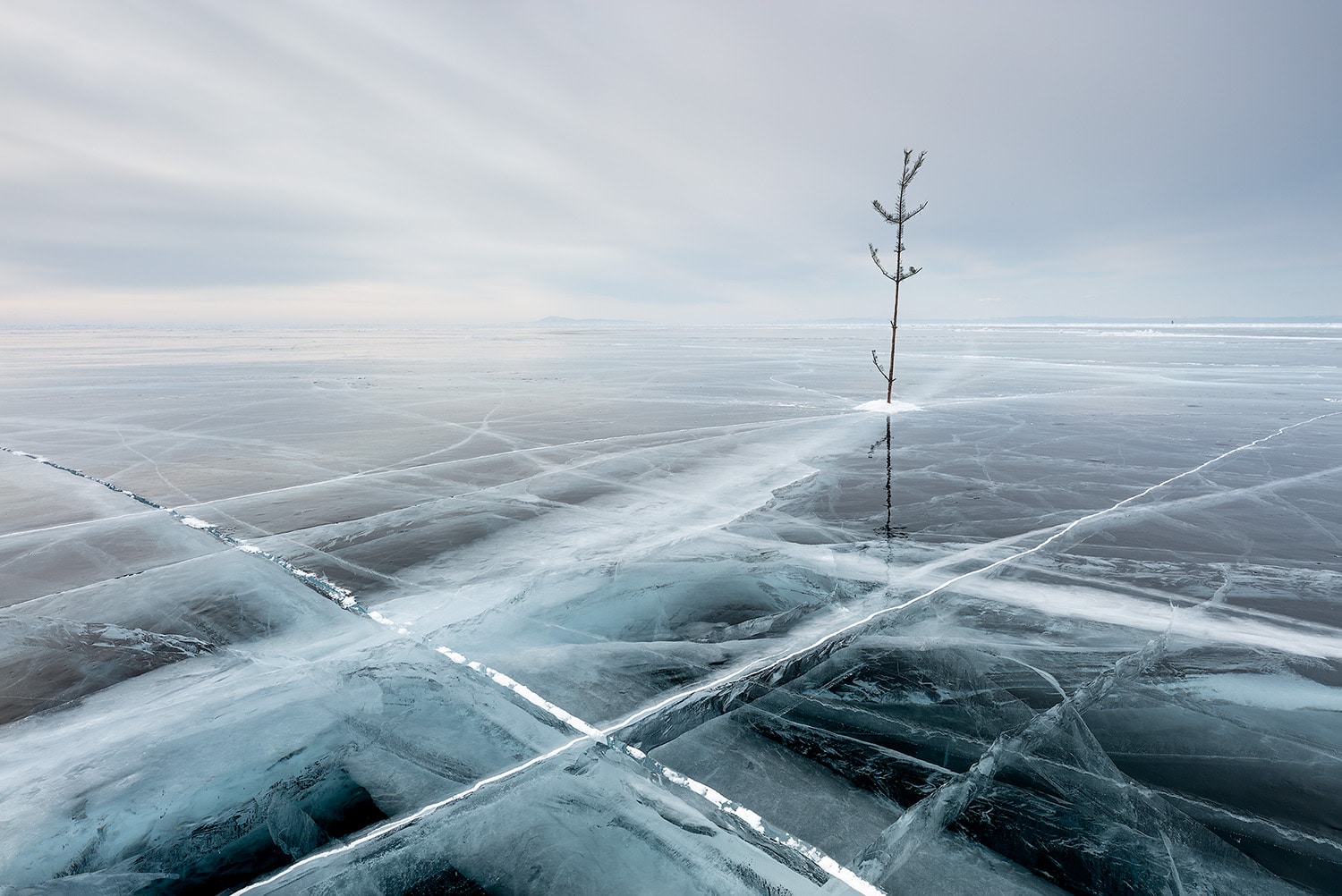 Beacons is a new book and exhibition by Daragh Muldowney documenting the surreal ice road system that traverses Lake Baikal in Winter.

There are two ice road systems on Lake Baikal: the official one that crosses the Small Sea, a frozen inlet that separates Olkhon Island from the mainland, and the unofficial road system that locals use to cross the Big Sea, the vast icy interior of Lake Baikal. This normally goes from the village of Uzury in the west across to Ust-Barguzin in the East. These journeys were once done on foot or with sleds pulled by dogs. Now, motor vehicles carefully venture out across the ice no more immune to the inherent dangers of such a crossing than any of their forebears.

Lake Baikal, also known as the Pearl of Siberia or the Sacred Sea, is the oldest and largest freshwater lake on the planet. It contains nearly 23% of the world’s fresh surface water and is also the world’s deepest lake with depths of up to 1642 metres.

Despite harsh winters with temperatures as low as -40°C, Baikal is a place of incredible biodiversity and home to thousands of species of plants and animals, many of which are endemic to the region. The lake was designated a World Heritage Site in 1996 as one of the planet’s richest and most unusual freshwater ecosystems.

Stepping onto the frozen expanse of the lake in winter is a multi-sensory experience.  A vast icy plain stretches out before you, surreal and otherworldly, beckoning you to explore.

Cracks run in every direction across the ice, a myriad of interwoven lines spanning hundreds of kilometres. Labyrinthine ridges made of jagged shards of ice known as hummocks glow sapphire blue under freshly fallen snow.

Melodic and disconcerting sounds of popping and grinding accompany your every step reminding you that this ethereal landscape is in constant flux.

Howling winds whip across the lake causing your eyes to water and then freeze, giving your face an icy coating that the locals call ‘Baikal makeup’.

Crossing the Big Sea can be a hazardous journey. The surface ice can become unstable due to wind, temperature shifts, underwater currents and large methane bubbles. The ice, 60cm to 2m thick, can come under huge pressure causing the ice slabs to either break apart exposing the frigid water below or crush together creating large jagged hummocks. Both are impassable and in order to help travellers across the ice, the locals mark out the road by drilling holes and ‘planting’ small pine trees that act as markers, “beacons” guiding the way.

I was instantly captivated by the surreal beauty of the Beacons and I returned to Baikal over the course of three winters in the hope of documenting them.

It fascinated me to see their organic forms emerging from the mist or appearing unexpectedly on the distant horizon in such a stark and alien landscape.

Each tree a benign presence in an otherwise barren world offering hope and safe passage.

Everything is in transition…

Evidence of rapid climate change in the region is now abundant. Water temperatures in the lake have increased dramatically over the last number of years and a fragile ecosystem is now severely under threat. Milder winters mean that the ice season is now shorter than ever and crossing the lake is only possible for a few short months each year, distancing communities once connected by the ice. The traditional and ancient ice roads may become a folk memory in the not so distant future.

The use of pine trees to mark out the ancient road system on Lake Baikal is no more. Small flagpoles now mark out the ice ‘roads’ traversing the lake. The trees seen within this book are now another part of Lake Baikal’s long history.

Beacons exhibition is open at the Copperhouse Gallery from 9am-5pm Monday to Thursday and 9am to 3:30pm on Friday. Also open Sunday 18th of July 11am-5pm.

Find out more about photographer Daragh Muldowney, on his website Dúlra Photography

One thought on “BEACONS”

Utilitarianism and ‘The Strength of the Absurd’