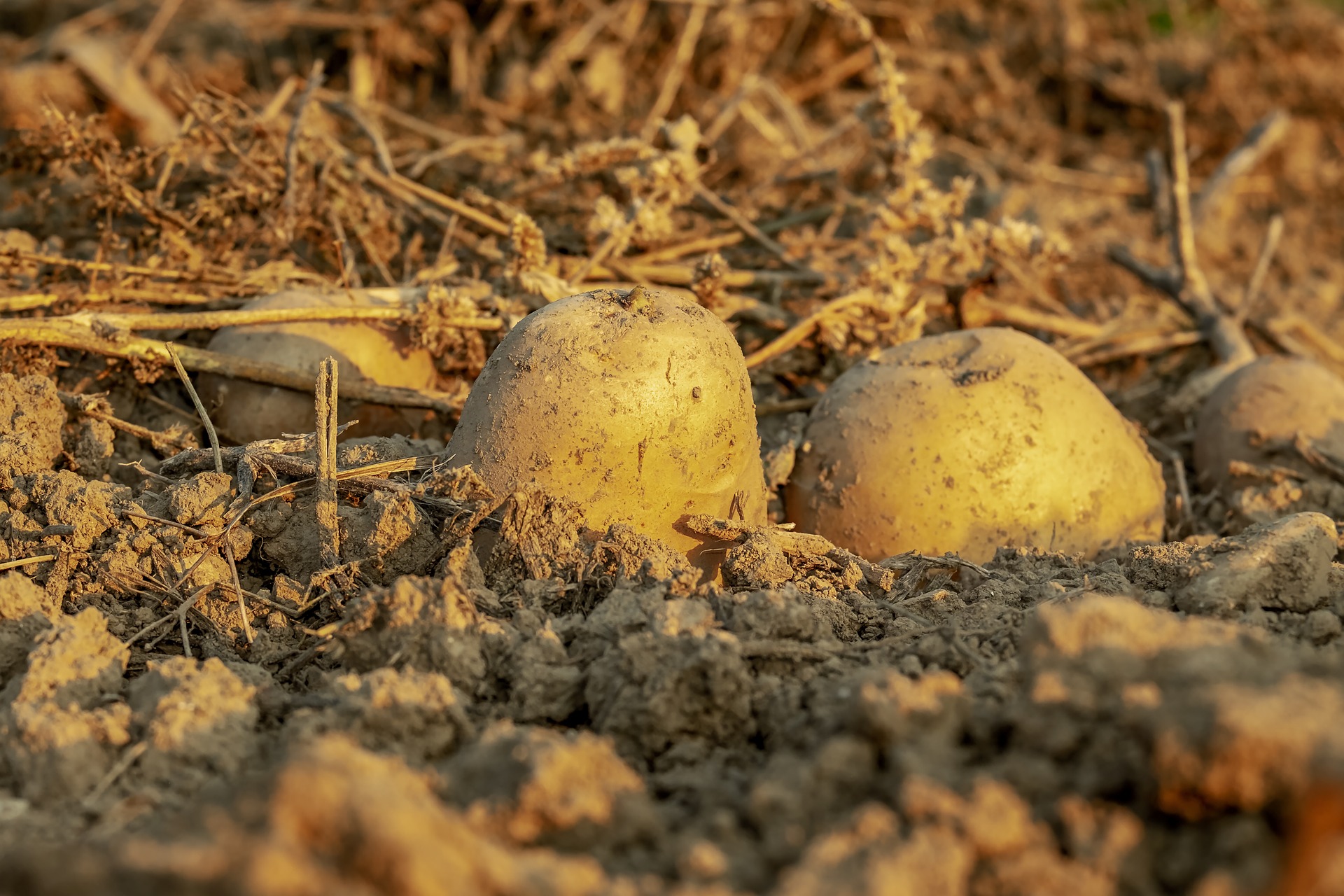 Potatoes have traditionally been the staple of the Irish diet. Spuds, as they are called in Ireland. The name spud comes from the digging of soil (or hole) prior to the planting of potatoes. Grown underground, it is the soil nutrients that gives potatoes their delicious taste.

Healthy soil grows healthy vegetables. Yet due to current farming practices, increased development and industrialisation, our food is less nutritious than it used to be. The soil we have today is virtually lifeless, depleted of its nutrients. A huge variety of vegetables and diverse vegetation have also sadly being lost.

This year, in June 2020, Met Éireann (the national meteorological service) issued a potato blight warning for Ireland. Following tropical storms, the outbreak of the coronavirus, and a global lockdown; we braced ourselves for yet another treat.

Blight is the fungus that caused the Irish Potato Famine from 1845-1850. A period of mass starvation and disease the Great Famine killed approximately two million Irish people, forcing a further two million to emigrate. Infecting potato crops throughout Europe it also caused some 100,000 deaths outside Ireland. The thought of such a recurrence looms on the horizon…

…What if another blight strikes?

The potato first came to Europe around 1570, being brought from South America by the Spanish. Apparently Sir Walter Raleigh introduced the crop to Ireland about 1585, and as history shows it became a staple diet for the native population. The humble spud is full of minerals, vitamins, protein, rich in calories, and virtually free of fat. One of the best package of nutrition in the world, so we are told.

A member of the nightshade family (Solanaceae), which includes tomatoes, aubergines bell peppers and chilli peppers. We may think that potatoes and tomatoes, for example, are quite different, yet the two plants are closely related. Both are in the same genus (Solanum).

We eat the fruit of the tomato plant – the part that contains the seeds and that develops from a pollinated flower. The potato on the other hand, we eat the swollen, starchy part of the plant that is used for storing food and water underground. These reserves help the potato plant survive periods of difficult conditions. Potatoes, are covered with tiny buds (the “eyes” of the potato), which gives them the capability of sprouting independently of the parent plant, even though they are genetically identical to the parent.

Domesticated potatoes (Solanum tuberosum) originate from the mountains of southern Peru and northern Bolivia. Potatoes have been domesticated for over 10,000 years. The Incas are believed to have been the first to cultivate potatoes high in the Andes mountain range, at 3,800 metres above sea level.

The humble potato began on the shores of Lake Titicaca, in Peru, around 8,000 BC to 5,000 B.C, where wild potato plants already grew. Communities of Inca farmers began domesticating the potato and learning how to preserve this sturdy veggie. They discovered that by dehydrating the potatoes into a substance called chuño (freeze-dried potatos) they could store it for up to 10 or even 15 years. One of the oldest potato recipes in Peru, Chuño is made from potatoes that have been soaked in water, dried in the sun, and left to freeze overnight. The process is repeated until all the water evaporates and the potato fully dries.

Peruvian potatoes were versatile too. The Incans boiled, mashed, and roasted them like we do today. Perhaps they even prepared something similar to an Irish potato cake, a pancake or Boxty loaf?

They also ground potatoes to a pulp and soaked them to create almidón de papa (potato starch), and fermented them in water to create a sticky tocosh. Often prepared for celebration events, it apparently has a strong odour and flavour. Similar to the Irish, Peruvian potatoes soon formed the basis of the Incan diet. It became a revered food.

Tocosh could be used as a natural antibiotic, as Penicillin is produced during the fermentation process.

Cherished for its many properties the Incans used potatoes to treat injuries, predict the weather, and make childbirth easier. They even used the humble potato to measure time; units of time corresponded with the length of time it took to cook a potato to different consistencies.

Native Americans were growing potatoes for many thousands of years before Europeans “discovered” the New World and brought samples back to Europe. Not until the mid-16th century, when Spanish Conquistadors invaded Peru (in 1536), did the potatoes spread beyond the shores of South America to Europe.

So taken with this root vegetable Peruvian potatoes very quickly became a staple on Spanish ships. Packed with vitamin C, the potato was easy to farm in abundance and store for long periods. It also apparently relieved scurvy among the Spanish sailors.

Sir Walter Raleigh, an English explorer, writer, soldier and politician, introduced potatoes to Ireland in 1589 on the 40,000 acres of land near Cork. It took nearly four decades before the potato spread to the rest of Europe, and became a prominent part of the European diet. The Irish, for example, only started farming potatoes in abundance in the 1780s.

Over time the potato proved easier to grow and cultivate than other staple crops, as wheat and oats. Not only does the potato contain most of the vitamins we need to be sustained, they were agriculturally able to feed up to 10 people for each acre of land cultivated.

There are more than 4,000 varieties of native potatoes, with over 180 wild potato species. While many of the wild ones are too bitter to eat their important biodiversity includes natural resistances to pests, diseases, and climatic conditions.

As you can imaging, with 4,000 varieties, potatoes come in many sizes, shapes, and flavours. Unfortunately, mostly of these varieties are mainly found in the Andes.

“By sowing potatoes at different altitudes and in different combinations, these potatoes create new genetic expressions which will be very important to respond to the challenges of climate change.”

– The Guardian, November 2019
how the Peru’s potato museum could stave off world food crisis